"I am a reader, not because I don't have a life, but because I choose to have many." ~Anonymous 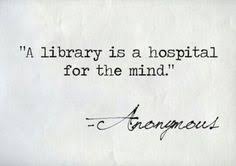 Reading did not come easily to me. I have three learning disabilities and one of them is dyslexia. I had to repeat first grade and in the summer in between the end of the first time and the repeat of the year I attended remedial reading classes with other children struggling to learn how to read. We sat in a circle in our little wooden school chairs and take took turns reading sections of our primary reader Fun With Dick and Jane out loud. I vaguely remember a phonics workbook, and day after frustrating day being unable to make any sense of the puzzle on the pages in front of me. I couldn't connect what the sounds we were making had to do with the tangled mass of meaningless letters in our book and when it was my turn to read I simply sat mute with my eyes on my shoes, except the moment near the end of the summer when the words suddenly untangled themselves, literally rearranging characters on the page and suddenly--suddenly I could read. I could read!!
My paternal grandmother read Lewis Carroll's Alice's Adventures in Wonderland and Through the Looking Glass to me when I was four. I had a brilliant imagination at a very early age. I thought the description of Alice shrinking down to fit through a door to a garden, was a little girl who was actually visiting my Gran's garden! At four years old I thought her garden was huge and it seemed to match the description in Carroll's book. Gran took me to the Loussac Library in Anchorage to get my first library card when I was five and by the time I turned eight she had the distinction of having read every single book in the library.
My paternal grandfather was Norwegian and he had the most wonderful stories, tales, and myths of the "old country' to tell me with his thick Norwegian accent. My desire for stories was fed by my Gran and Papa.
Once I learned how to read I lived in an alternate universe every time I opened a book. I checked out a book on speed reading from the local library and by the end of my thirteenth year I was devouring books at a pace that has never slowed down. I made a count of the books I downloaded to Les' Kindle Fire from February 2017 to June 2018: two hundred and forty seven books and I've read every one of them. I retrieved them via BookBub. The majority of them were free and some were no more than 99 pence. Reading has saved my life more times than I can count. I am pretty sure Paradise involves a library full of delicious books I have yet to read. Les will be there, sitting in the sun with a book, my empty chair beside him. We were cultural touchstones and dictionaries for one another. We often sat side by side in our chairs reading. If his author was American, Les would query me every now and then about puzzling Yankee words and phrases. Likewise I would question my Best Beloved in return about British-isms that left me baffled.
I am working on a book list that I can upload to a tab on this blog so I can share all the lovely books I've discovered with my readers. I have kept a list of all the books I've read since June 1993 when I finished my university degree and I could finally read for pleasure again. Today though I am sharing two books only and both are about boats! Mary South is an American author and Ernle Bradford is British. 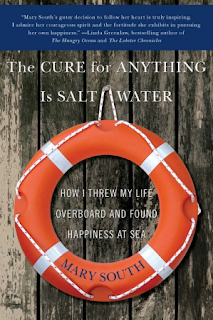 The CURE for ANYTHING Is SALT WATER by Mary South


At forty, Mary South had a beautiful home, good friends, and a successful career in book publishing. But she couldn't help feeling that she was missing something intangible but essential. So she decided to go looking for it . . . at sea. Six months later she had quit her job, sold the house, and was living aboard a forty-foot, thirty-ton steel trawler she rechristened Bossanova. Despite her total lack of experience, South set out on her maiden voyage--a fifteen-hundred-mile odyssey from Florida to Maine--with her one-man, two-dog crew. But what began as the fulfillment of an idle wish became a crash course in navigating the complicated byways of the self. South's candid look at her life is bracing and laugh out loud funny.

Excerpt: "Not long ago,  I was probably a lot like you. I had a successful career, a pretty home, two dogs, and a fairly normal life.
All I kept were the dogs.
The one day in October 2003, I quit my good job and put my sweet house on the market. I packed a duffle bag of clothes and everything else I owned went in to storage. Within weeks I was the proud owner of an empty bank account and a 40-foot, 30-ton steel trawler that I had no idea who to run. I enrolled in nine weeks of seamanship school, and two weeks after my course ended, I pulled away from the dock on my very first trip: a 1500 mile journey through the Atlantic from Florida to Maine.
My transformation from normal person to unhinged mariner started casually enough..."
The author's candid and humorous insights into her life hit just the right spot for anyone who has ever taken stock of life and wondered if they were where they really wanted to be. The majority of us have experienced this but few have the courage to turn away from a conventional life and reach for a dream. Mary South did just this and she generously brings us along on her journey. 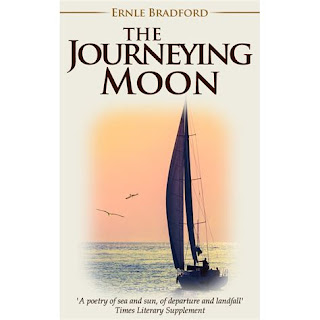 The Journeying Moon by Ernle Bradford

‘Life does not come again; if you have not lived during the days that were given to you, once only, then write it down as lost …’

Ernle Bradford was 21 years old when he read these words of Chekhov which were forever to haunt him. It was this simple truth that later prompted him and his wife to sell their flat and furniture, leave their jobs and, four months later, sail off to France in a ten-ton Dutch cutter, the Mother Goose. The Journeying Moon tells of their voyage through the French canals to Southern Italy and Greece and a peaceful existence off the beaten track. Ernle Bradford writes charmingly and evocatively of his Mediterranean adventures: of the people of Malta who were convinced he was from MI5; of his brushes with the Mafia on Sicily; of his experiences as ‘assistant naval adviser’ on a film unit in Palermo, and of the caves of Levanzo, which boast the southernmost examples of prehistoric European art.

Excerpt: "The first time you make a departure for a foreign coastline in your own boat is as unforgettable as first love...the rain had stopped and a soft mist sprawled over the river (The Seine) and the country. As we sat in the cockpit over breakfast MOTHER GOOSE seemed to float suspended in a gossamer world...the damp earth smelt rich with grass, trees, and flowers,the distilled essence of spring.  We were motoring through an innocent world--a morning such as one remembers from childhood."
Bradford's prose is quite simply lush, full and rich with description that pulls in his readers. We cannot  help but sail along with Ernle; pick up this book and read the first few pages and you will be hooked.
I include this message for one of my dearest friends, my heart and soul sister Karen Barron back in Pullman, Washington, USA: Although you were not aware of it, you travelled along with me through the pages of Bradford's boo; you and Charlie, sailing and living on Hana Maru. I could feel your presence sailing with me through Ernle's  exquisite prose as we were  kissed by the sun, the salted sea and the fragrant winds of the Mediterranean.
Finally,  since this is a literary post I conclude with a poem for everyone suffering from the heat. I don't think anyone captures better how I feel in this miserable unremitting weather than one of my favorite poets, Marge Piercy, from her book Available Light, page 69.

The crickets rub their legs so fast they zizz
so I imagine their thin, dry legs sparking,
starting a fire, except that nothing would catch

on this concave day when every piece of paper
feels like overcooked linguine. Wood
of table, chair exudes a tacky grease.

This is not fire but only heat: life
in a slow pressure cooker. Steaming
preserves vitamins. Yet no predators

bound after prey. They are all sleeping
under bushes, bellies to the still cool
earth the compress of leaves has saved.

Night comes as a clumsy lover pressing
you into clammy sheets; smothered
you gasp and loll, less a landed fish

than a drowning wombat who dreams
the thin dry air of mountaintops--not
its natural habitat, but is this steam table?


Surely I am cooked now. Turn me over,
sprinkle salt on me. Try me with garlic.
The other possibility is that god is a slug.

I like that poem! though it's been far too dry for slugs here, so I don't think God can be one! I have just seen the first cricket of summer, or it may have been a grasshopper - didn't get a close enough look. I would be interested to see your book list - do you focus on American authors and download them, or do you haunt the charity shops like me?
Debby x

I read a broad cross section of authors but I think most of those on my list are American because that is where I was living when the bulk of my reading was done. When I lived in the States I had over a 1000 book sin my personal library and I checked four to six books a week out from the local public library wherever I lived. I brought about thirty of my personal books with me from America to keep on NB Valerie. Some books I will read repeatedly and I couldn't imagine not living with them. They were like old friends.

Once I settled in aboard NBV Les and I haunted the charity shops and brought loads of books home to read and then recycle back to charity shops or on to other boaters, until I bought Les a Kindle for his 64th birthday. He was hooked and he purchased a Kindle for me. I have 624 books on my Kindle.