"No matter what, no matter where, it's always home if love is there." ~Anon. 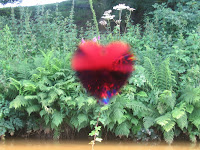 After just over a frenzied week of interior remodeling aboard NB Valerie and two days cleaning from bow to stern, we woke extra early on Sunday morning, August 26th to move from Lyme Green on the Macclesfield Canal down through the flight of twelve locks at Bosley and on toward Congleton and our rendezvous with American visitors.
Of course rain was forecast for most of Sunday so we just decided to go for it. Imagine our surprise when we discovered the Macclesfield Canal Society was in attendance! Bless those marvelous volunteers for giving up a day of their bank holiday weekend to help boaters through the locks. We made a donation and enjoyed a natter with each of them as we traveled downward, enjoying the spectacle of the Cloud wreathed in a gauzy mist. 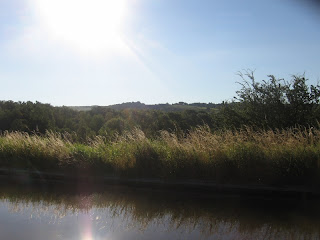 We moored up on the Danes Aquaduct overlooking the Biddulph Valley and I put a pot of beef stew on to simmer for dinner and baked a Chocolate Kahlua cake for our guests. Dear Sir and I were both knackered having worked hard to get things in literal ship shape. We enjoyed our brothy dinner with par-baked rolls and slices of sharp cheddar cheese, went for a walk and fell into bed earlier rather than later. I slipped away to sleep accompanied by the hemming and baaa-ing of a field of nearby sheep who were serenaded by a very loud broadcast of Elvis Presley from a local landowner. Odd isn't it??
Today we rose early again, jumping out of bed to shower, shave and move down to the 48 hour visitor moorings at Congleton, just near the steep steps up to the Nag's' Head pub which is across the way from the rail station. At 12:30 or thereabouts the train pulled up, and lo and behold there was our American friend Kilaynn Glubrecht and her lovely granddaughter Alana all the way from Spokane, Washington, USA!
Kialynn is one of the Wednesday Women who vetted Les when he returned to American in February 2011 to propose to me. She is a math instructor at Spokane Falls Community College. Kialynn has always amazed me with her concise ability to reason at the speed of light and her sharp and pithy wit has kept me in stitches many times over the past seventeen years. She is also a fabulous cook and I've enjoyed many fine meals at her home. I was pleased therefore that she and Les got on well with one another from the first. 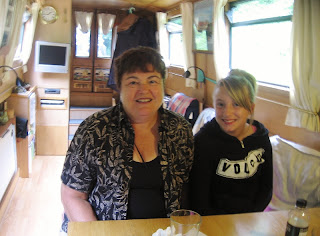 We boarded NB Valerie for a chat while I fixed Tapp Sandwiches, grapes, and Elderflower cordial for lunch, getting underway soon after with Les at the tiller. It was wonderful to see their amazement at how spacious a narrow boat actually is, and how well organized ours is--especially after all of Les' terrific carpentry.
We women sat out on the bow and had a good chinwag as the lovely countryside passed. I am caught up now on how the other Wednesday Women are doing (Hi Babes! I sure do miss you! Les and I look forward to having a dinner with you in November); we talked about what our children are up to, and I reflected on life abaord a narrow boat.
The rain commenced once more and and we went inside to warm up by the stove. After hearing about the highlights of their visit to London and Windsor, we had hot chocolate with brandy and joined Les at the stern so Kialynn and Alana could see how a lock worked.
It was only a stop lock at Hall Green on the bottom of the Macclesfield canal, but it still allowed them to watch the process. Les jumped off and tied off the mid line, asking me to throw him a windlass. My first attempt ended up bouncing off the bank and landing in the canal! So did my second attempt. To much laughter, Les got out the BIG magnet on a rope and proceeded to pull one of our six windlasses out of the drink.
He never did find the second one, which we found recently laying in the dirt near a swing bridge. Folks off a nearby hire boat came over to ask what we were fishing for which led to another round of crazy laughter as we explained fishing for windlasses with a magnet.
After moving through the lock we came across the two final aquaducts, making the turn to the left past Red Bull Boat yard, cruising slowly through the permanent moorings. Just before Kidsgrove bridge we encountered a boat in trouble. They were trying to make their way towards shore without any power. We slowed down, and one of the gents clambered aboard the gunnels of NB Valerie, walking his way towards the stern with his mid line in hand.
After pulling their boat in to ours, Les took us to shore and the fellow climbed off, pulling their boat in to land. They had a sleeping bag wrapped around their prop!! After a grateful thanks to us and a suggestion from me that they might wish to call River Canal Rescue if they couldn't get it unwound themselves, we started off once more for the junction of the Macclesfield with the Trent and Mersey. 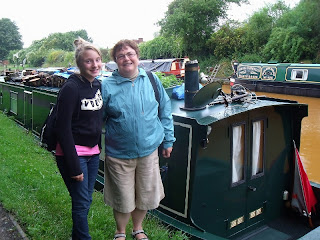 As we came under the bridge we saw another boat in distress! This was a hire boat which attempted to turn onto the Maccie and overshot the bridge hole. As we came through and turned onto the T & M, Les shouted encouragement to the couple. The wife said with a smile, "We've already hit both banks before the bridge so we might as well try for the rest of them." We all laughed, and Les gave them some advice and a couple of pointers which worked. As they slipped away onto the Macclesfield, we moored up for a cup of tea and a slice of chocolate cake while we waited for 6:30 and the train which took Kialynn and Alana back to London.
They had a great time, with some unplanned events which will lead to fun tales back home. We enjoyed their visit thoroughly. It was wonderful to see you sister friend. Alana is a lovely creature; smart and funny like her Grandma. Thank you both for gracing our home with your presence; for taking time from your very busy trip to England, to spend a day cruising with us.
Posted by Les Biggs at Monday, August 27, 2012

... and what is a Tapp Sandwich prey tell?

Hi Kevin! Your answer will be in the next blog post!
Cheers,
Jaq