The Newport Pagnel arm left the Gd. Union or Gd. Junction as it was in 1817 at Linford Wharf adjacent to bridge 77. There was once a wooden bridge across the arm.
Opened in 1817 it had 7 single locks on it`s 1 1/4 miles journey into Newport Pagnel. The railway purchased the arm in 1864 with a view to using part of the canal bed for the rails into N. Pag` with thoughts of future extensions to Olney & Wellingborough.

The line was busy carrying workers to the Wolverton railway carriage works, 3,500 workers in 1877, and had stations at Bradwell and Gt. Linford. The line finally closed in the 1960`s.  Interesting that the present Wolverton station on the east of the canal at bridge 71 is the 3rd  station site owing to expansion of the works over the years. A lot of the carriage sheds have been converted to housing and light industry retaining the old shells of the buildings. Sadly some have given way to new development and as you cruise by the old walls seem to  look across the water with superior airs at the new builds.  Wolverton works link HERE but i like this BLOG especially the comments. 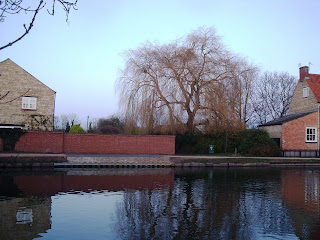 Looking across from the winding hole on the south side of  brdg.77 the entrance is quite clear and the warehouse on the left above and the right in the picture below was used in the last war to assemble tractors that arrived by boat on their journey from USA. The wooden bridge can just be seen in the picture below. 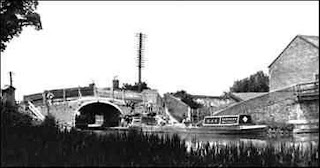 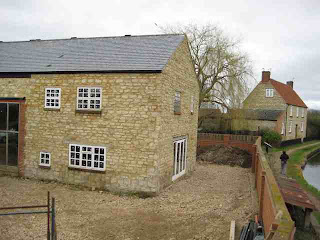 in late 1700`s now GradeII listed and sells for around £800,000 according to records i found. The warehouse is now a really beautiful conversion(old pic) and i would guess the asking price would be similar to the old pub. 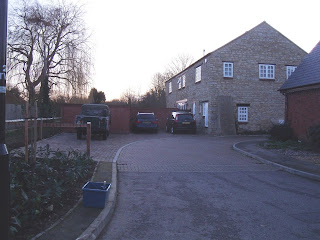 Looking from the rear the old pub is out of shot to the left and i am standing where the canal once flowed. Immediately to my left is the lock cottage below. 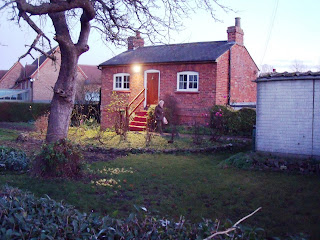 The lady in the picture was on her way to feed the ducks was a pleasure to talk to. She told me her garage, the white building, was subsiding as it was on top of the lock chamber. Just follow round past this garden to the left and the bed of the old canal is there to see.


The  platform of Gt. Linford station can be seen from the road just a short walk from the canal bridge. The line crosses the canal on it`s way to Wolverton at brdg.76a. 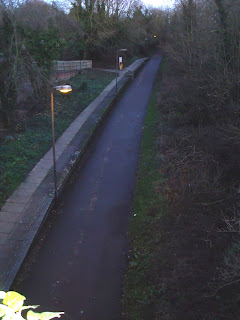 A good place to stop is on the offside visitor moorings just under the bridge. From here you can walk back to all the above (5mins) plus you are in the park with the 17c Manor house and Almshouses and also 13c St Andrews church.  The Nags Head pub in the village (10mins walk) dates back to 15c and with some other interesting old buildings this makes a good mooring. I have stopped here 3-4 times and found it very quiet.﻿
Posted by Les Biggs at Friday, January 13, 2012

Well, thank you for the Wolverton Woks link, fascinating stuff. How do you find these items of historical interest?
Mikem still owner of Garnet's slowest Triumph.

I like the history so anything i read about a particular place gets me looking and Googling. What i find might interest others so i blog it.