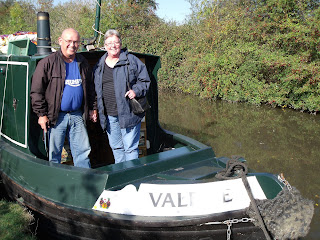 just in the area but to be in the country. They were on a visit from Canada not only to visit family but also to check out some boats for sale as they are very soon to be live aboards. Look forward to seeing you both again next year when you return.

Time for a move and we chose what we thought might be a quiet spot between Hillmorton and Braunston. Arriving a bit late on a very windy day we spotted bloggers Lynne & Paul on Piston Broke. The following day we took a break from the alterations on board Nb Valerie and spent a very pleasant time with them both drinking tea and chatting aboard Piston Broke.

We caught the bus into Daventry which conveniently stops outside Rye Hill & Onley prisons that lie just beyond a small wooded area along the towpath. On our return we found contractors cutting down some trees that were getting a little to close to the prison wall so that was my job for the next day, wood gathering.
All the best laid plans can change and they sure did the next day. First Chas & Anne turned up on More 2 Life so the wood still had to be collected an hour or so later after tea and chat. 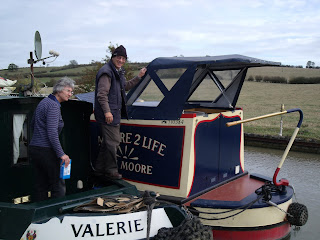 The wood had no sooner been collected and the chain saw cooled when along came Maffi on Milli M. Having spent a long time on the South Oxford he is now once again off cruising the system. The last time i met Maffi was on the southern gd. union at Winkwell about 4yrs ago. His timing was spot on as Jaq was just doing some lunch and Maffi didn`t take long to tie up and come aboard for lunch and Ginger cake fresh from the oven with warm Toffee sauce, how lucky was that. ﻿ 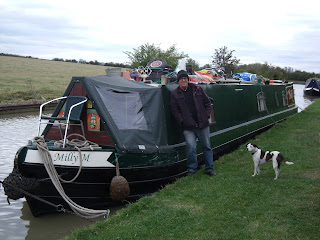 Next arrivals were Carol & George on Rock `n` Roll. So more tea Ginger cake and chatting on board Nb Valerie. Later in the evening together with Maffi we spent a very nice time as guests of George & Carol consuming wine and some home made Irish Cream liquor from a recipe from friend Tina. A new bottle will be prepared for when we see you Tina.

We moved off this morning regrettably to get water in Braunston and are now moored a few miles out in open countryside giving me a chance to get some bookshelves fitted.

Les, have to make a small correction here, sorry, might ahve been our accents! 'Erself's name is actually Phillippa, usually shortened to Phill, sometimes for the kids we have had in our care, Pippa. Nice picture btw, do not get many of us together, usually I am behind the camera.

Hi Mike,
Sorry for the error. The fault is mine. I thought you told me to call her Phyll as in Phyllis! I've corrected it in the blog post. Phillipa is a lovely name--and she is a fabulous woman.
:) Jaq

Hey fancy meeting you two just there, where I stopped.

Maffi
We had to meet again sometime but 4 years is a bit much.Enjoy your new venture.