THE BATTLE TO GET HOME

﻿
The great escape or my sad return from America, i prefer the latter, was due to begin on Wednesday last at 11.15am from Pullman Airport.  The 76 seat plane would leave Seattle pick me up and return to Seattle via Lewiston for a connection to Minneapolis and onto London.
So off i set driven by my Alaskan born driver,  6" of snow and a blizzard is no worry for Jaq,  and we arrive an hour before take off. Paperwork checked, the counter staff advise that the plane has been delayed by a mechanical fault and not only is it running 30mins late in all probability it will not be able to land due to weather conditions.
The advice being given to all passengers is to travel 30 miles to Lewiston and board the plane. The reason for this is that Lewiston is some 2000`+ lower elevation than Pullman and at the time has no snow.
So this lady (fiancee) has Eskimo nerves of steel and estimates the trip will take 45mins so off we go and in no 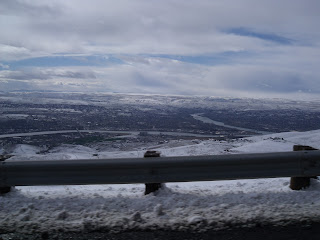 time we are approx. 2000` above Lewiston (right of picture above), the snow has now almost stopped and we descend down highway 195 into the city and onto the Lewiston airport with an hour before the plane is due to ﻿ 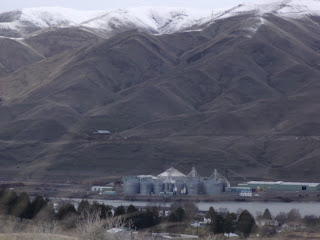 take off. In the picture above looking back up the 2000` we have descended you can see the snow high up has given way to a clear landscape. So in the queue to check in  it soon becomes apparent something is not right and an enquiry soon reveals the plane has been cancelled due to a mechanical breakdown. After queuing for an hour flights are re-arranged for 6.30 pm to Seattle, New York and onwards to London.
So back at 6pm and the plane is running late as runways are being cleared and planes de-iced at many airports causing not cancellations but minor delays. Sitting waiting i studied my new itinerary and noticed the time between flights at Seattle was diminishing rapidly and knowing the Seattle airport layout i knew i wouldn`t have time to get from one side of the airport to my New York flight. Back at the desk the agent agreed and i decided a flight the following day from a different airport would be better. Now i had Spokane-Seattle- London by British Airways on the Thursday. 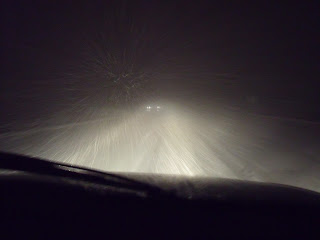 So back to Jaq`s and in the picture above can be seen the conditions after climbing the 2000` out of Lewiston. Having to spend another night with Jaq was hard but someones got to do it and we were brave. 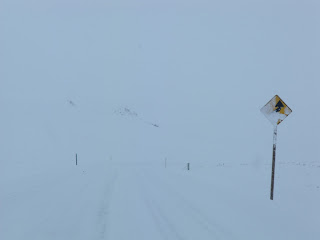 The following day we set off on the 80mile drive to Spokane and in the  picture above taken from the passenger seat can be seen, well almost, the road leading to the main highway. The posts at the side of the road are the only 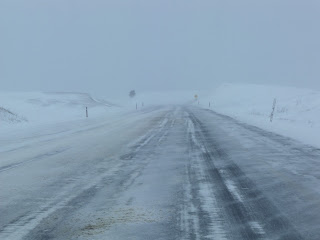 guide to the road`s route with no tree line or hedgerows to give a clue. Getting on the main highway in the picture above was a lot better as snow ploughs were very much evident and we passed several on the journey. 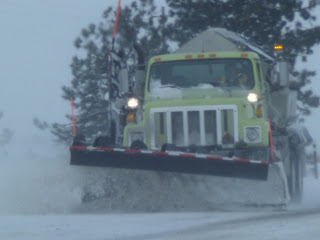 All the way it was evident that life just carries on as normal with traffic moving quite fast even the trucks.In the picture below you can see what is a common site here, an articulated lorry(semi) with an additional trailer added. 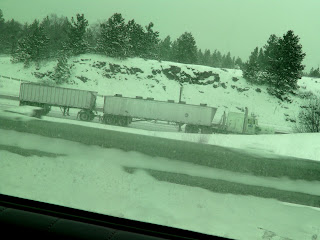 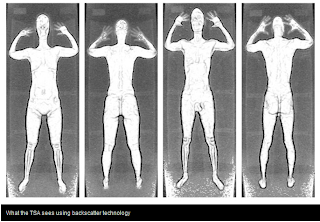 The pictures above and below show a body scanner that i had to go through on my inward journey to the States.
﻿ 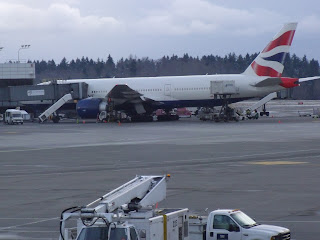 ﻿ Safely in Seattle and here is my BA flight that has delivered me safely back in the UK.
Posted by Les Biggs at Monday, February 28, 2011

Darling,
I felt as though I had crossed the continent several times, since I also had to drive back up to Spokane on Saturday night/Sunday morning to take Sparky to her 2:45 AM train back to Portland--which never made it as weather stranded it in Whitefish Montana. Amtrak provided buses and away she went to Oregon anyway and I returned home in the snow dark night.

The gift of one more night with you was lovely--and worth braving any blizzard nature threw at us.
I miss you so!
Love Jaq

BTW - Deleting comments must be part of the Homer Simpson syndrome... Doh! LOL

Hi Jaq...missing you
You are a very good driver
but please be careful as there are some on the roads not so confident.
Now all you need do is drive in & out of work, enjoy the rest.XX

Kein
Some moan about the scanners,human rights etc but i have a human right to travel in safety so none of the security measures bother me.

I woke this morning to over 24 inches of new snow and it was past the front bumper on the car--and up past my knees. Wee Man was trapped under the house. After digging him out, and digging out the car and the garbage can, I finally made it to work. I'm glad you are confident in my driving skills.
Nanuq of the north prevails! (Nanuq means polar bear in the Inupiaq Eskimo language)

Jaq
If you are a polar bear then you are a very small one at 5`1".
All good things come in small packages.