Terry & Maureen who we last saw at the Crick boat show back in May turned up at Fenny Stratford. They are heading for the Aylesbury Arm to moor for winter. Nice to meet up with people again, this happens quite often living the life i do.
Moved on down to Marsworth to catch up with Andy & Tina on NB YTENE who we cruised with for a month following the Crick boat show. We all had a nice meal and a drink at the Red Lion in Marsworth village and have decided to all carry on south together. That will be nice as they are a nice couple. Back at the boat show where we all met they sadly had to have Tess their 13 yr old four legged freind put to rest following a long illness and she now lays peacefully among the trees, a stone marking the spot. It is very common to see graves of boatowners pets along the canals.
While taking a 5 day break at Marsworth ( boatmans holiday) my son Steve phoned asked my location and said ok see you this evening. So that was a nice surprise and a chance to give the second youngest g`child a cuddle.
Then another call from son Andy resulted in being taken out for sunday roast at the Anglers Rest pub so more hugs from g`children Jack & Jordan. They both had news for me. Jordan had started dancing lessons and Jack said i had to be at his birthday party in December because he had a Maashishan coming. Magician? must be that i would think eh folks.
Hazel the resident mooring warden patrols her patch at Marsworth giving out a welcome letter containing her mobile number for boaters to contact her for any reason, and advising boaters of the length of time they can moor at their chosen spot. A very pleasent lady. 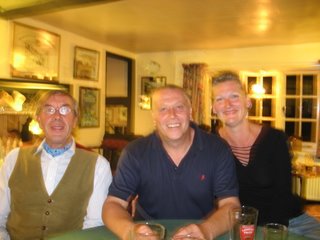 John(left) who i have been travelling with all summer and Andy & Tina all enjoying a meal and catching up on our travels since we parted company back in early June. 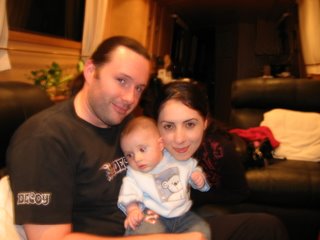 My son Steve & his wife Ozlem with G`son Teo. Won`t be to long before he will want to be on the tiller. 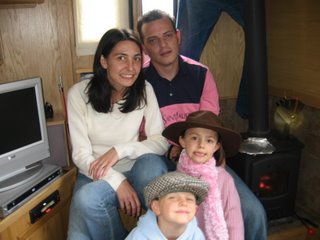 My son Andy, his wife Bev and Jordan & Jack who have found G`dads hats. 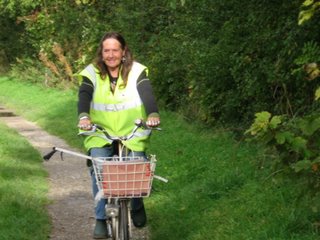 This is Hazel the resident mooring warden off to do her rounds. Telling me off as she went by "i don`t like my picture taken" as she stopped pedaling & smiled, poser.
Posted by Les Biggs at Wednesday, October 25, 2006

Sounds like a wonderful time with your family. Smashing photos

Fantastic. And they (little ones )are staying on board after a fireworks display and want a cruise on the sunday.
Sounds good to me.