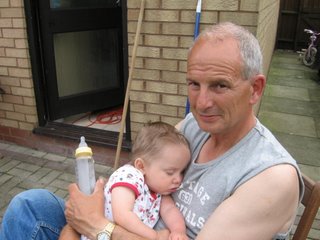 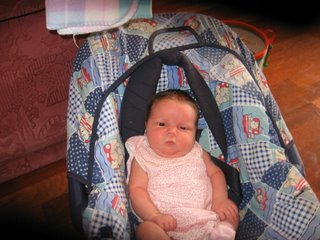 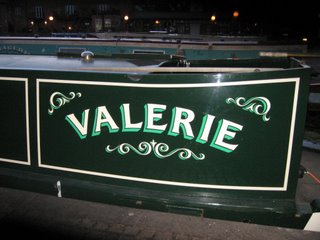 A nice job made by the signwriter Beccy
Having secured a mooring in the Mkt. Harborough basin Beccy arrived on saturday morning to start on signwriting the boat. Now i know it was going to be called SELEUS as in les/sue in reverse but following the amicable parting of sue and myself and now being on my own i have called the boat VALERIE after my late wife. Anyway Beccy worked over the w`end and come sunday lunchtime she had completed the bow both sides and one side of the rear. As she wanted some time with family she decided to finish off on monday so i turned the boat in the basin and moored ready for her to arrive monday. I connected the electric hook-up that came with the mooring charge as i was going to be away for a few days visiting family.The good thing with the hook-up is not having to worry about the batteries going flat while away and my freezer thawing, also it gives me a chance to use the washing machine to my hearts content. Normaly i would put washing on as i cruise to maintain battery power.So off i went catching a train at Mkt. Harborough station and ended up standing all the way to luton as midland mainline for some un-known reason had put on a 4 coach inter city instead of the usual 8 coach. One of my sons met me at the station and within 10 mins i was cuddling Keira my newest grandaughter who entered the world 2 wks ago at just over 9lb. Managed to get down to Watford and see my other son Andy and his wife Bev and of course g`children Jack and Jordan- Hi there kids. Then back to luton and more visiting of freinds. Unfortunatly did not see my son Steve and his very pregnant wife Ozlem as she was not feeling to good. Will see you both when i next visit by which time i will be a grandad again.
So where am i now? I left Mkt Har` on thursday and caught up with andy and Tina on their boat YTENE and John on TUI at the bottom of foxton locks for a route meeting over tea of course. It was decided Andy/Tina would head for Rugby and John and i fancied Coventry so we all would cruise together for a while. So up the foxton flight we went one by one me in the middle. Now the way to go up a staicase flight, that`s where the gate you exit becomes a gate for the next lock is to let the person in front clear the lock and shut the gate before you do anything to enable your boat to enter. Now for reasons best known to John he decided to start winding the paddles before i had got half in to the next lock let alone shut the gate with the result i had no water under me and ended up hi and dry on the floor of the lock. Well we soon got it sorted but the lockeeper was soon down from the top of the flight wanting to know who drained the middle pound wasting his preciouse water. Poor John he had to own up.So at the top lock the ice creams were on him. That reminds me at the top lock as i was about to exit 2 young boys with parents wathing decided to get a bit to close to a swan and her young with the result out of the water came mum, they retreated quick but soon again moved forward towards mum who was between her babes and the boys. The wings flapped and the hissing started and as the boys parents did nothing i got off the boat and got them back from the swan, the problem was there were 2 elderly people next the boys and if the swan had attacked the boys would have moved quick but that would have left the elderly couple right in the line of attack.
After a rest we cruised for 2/3 hours and stopped the night in the middle of nowhere, hot sunny peace. After the wet days spent at the crick show it would appear summer is here as i sit under the sun umbrella typing this. As we are re tracing our previouse route from crick i am sitting back at crick where just 2 weeks ago boats were breasted up for the show, not so now moorings for all. Will stay the w`end as Tina/Andy watching motor racing on tv sunday, John has visitor sunday and i am just re-laxing and enjoying this wonderful life.
Posted by Les Biggs at Saturday, June 10, 2006

theres a song around at the mo that you might like, its called "valerie" its by the "zutons" i hope you like it, check it out :)

Hi Les, I had to smile at the thought of you 'grounded' at the Foxton Flight!! Cor Blimey, I would have been.. errrrr ... a bit worried about the lock keeper coming and finding me like that to say the least!!.. Glad you got away with it lightly. Nice to see you on the move again.. Take care

Hi Annon
Leave your name in future we`re all friendly on the water. Just today caught half of the song ¬VALERIE` sounds quite good try and hear it in full soon.
LES