TO BRAUNSTON BEFORE CRICK 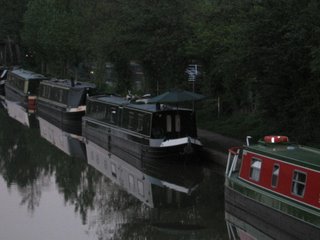 My floating home floating in the cool of the evening after a day of hot sun. The umbrella still up. Behind is John`s boat. We will float together at least untill after the Crick show. 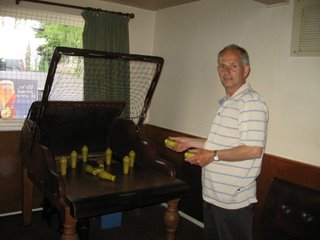 Playing skittles in the village pub 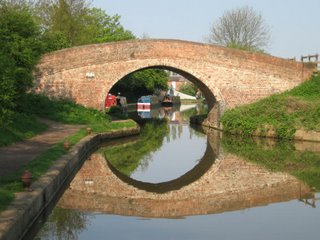 The Dis-abled mooring bollards just in front of our mooring looking through the bridge you can just see the white walls of the entrance to Braunston marina. 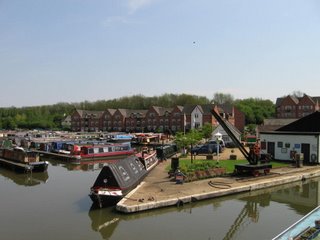 Braunston marina from the bridge entrance.
Well Braunston tunnel was great, i really love tunnells maybe it`s because i also like steam railways. It must be the fumey dark atmosphere. Anyway all my adult life i`ve loved going in tunnels.................
After the tunnel came the 6 lock flight into Braunston. As soon as we exited the bottom lock it was clear this is a very busy canalside location. Hire boats breasted up on the left(port) as far as i could see and a large chandlery and boatbuilders to the right(starboard). Slowly we edged forward in places just room for one boat at a time as we approached the very large Braunston marina we saw just a short empty bankside so as we could see ahead under the bridge that no space was available as far as the eye could see we moored up. We just squeezed in before the bollards that were for dis-abled boat users although untill you stepped a shore you would not have known they were for the dis- abled. All there was to indicate them was a small dis-abled sign on top of the bollards, no signs on fence, posts or the very nice concrete edging. No wonder the two days we were there so many boats pulled in then off again. Nice though that so many boaters respected the restriction and sought other moorings, doesn`t seem to happen in car parks but thats in the other world i left on the cut a more caring person lives.
A lovely few days here hot and sunny, even had my sun brolly up so glad i didn`t leave it behind when i sold the house. It fits neatly in the hole i drilled in the seat i made up in the bow well deck.
The village sits up on the hill above the canal. Just a typical canalside village but has all the boater needs to feed himself and crew. There is a small supermarket with post office and a superb butchers that sells other produce including some lovely meat pies, three now living in my freezer. Also a grade one chippy, cooked while you wait. Two pubs , Wheatsheaf and the old Plough. Both had skittles game in the bar.
Anyway will leave you with a few pics.
Posted by Les Biggs at Saturday, May 13, 2006

It still looks good. Hope the weather picks up so you can get a pic of the brolly! S

Hey Les, enjoy the leisurely cruise to Crick, I'm visiting this year so I'll keep and eye out for you and say hi if I spot you.
All the best
LesD

From Braunston it seems to me that it is a week or two travel time to Crick. When is the festival taking place? Hope you have a great time, and enjoy the traveling to get there.

Hi LesD
Moored next to bridge hole at bridge 11 just 5mins walk from road bridge leading into show.Give us a ring 07966 371993 your most welcome.
LES

HI Mark
BRAUNSTON TO CRICK IS JUST A DAY. WE HAVE GOT HERE EARLY TO GET A PLACE AS THE SIGNS ARE UP ALREADY RESTRICTING MOORING.wE HAVE GOT IN ON THE POUND AS YOU EXIT TUNNEL BEFORE 1st BRIDGE(11). IT`S THE ONLY BIT WITH NO RESTRICTIONS, BUT ONLY ROOM FOR ABOUT 15 BOATS AND 6 HERE ALREADY.OTHERWISE IT COULD BE UPTO 2 MILES I HAVE BEEN TOLD BEFORE YOU CAN MOOR.
LES

Hi Annon
got a pic of brolly will blog it soon.
LES