The show has gone ahead despite problems of rain and fire. Saturday was a very wet day and coupled with the heavy rainfall in the week before the show the problem visitors had was leaving the show car park that had become a mud bath in places. Many had to be towed out despite several lorry loads of aggregate being laid at variouse points around the ground. But this was not the problem facing visitors on sunday, most of them could not even get to the car park owing to a large fire that started late saturday night in a very large food processing plant on crick industrial site near to jct. 18 of the M1 the main entry point to the show. The fire brigade started pumping water from the canal in the early hours of sunday and as i type this 11.45 am monday water is still being pumped to the site of the fire. Hoses laid from crick bridge down the road have prevented acces to the show site from the M1 leaving only access from the east by way of the small lanes that rapidly became grid-locked. The result was crick village became a car park as did any piece of grass verge in the surrounding area. At the height of the fire 100 firefighters were at the scene. In spite of all this there was a noticeable increase of visitors to the show on sunday and after a very quiet wet thursday a nice sunny day made everyone forget the problems of getting to the show. The entertainment at the end of the day was very good but by far the best was a rock band sunday night called " The Platforms", my head is just recovering but it was a good night spent with some of the boaters i had met during the last few days here.
I last came to the show a year ago looking for a boat and spent a lot of tme talking to builders and was surprised to be recognised by a builder from last year who even remembered my name. It has been very pleasent here in the run up to the show watching the site change from an empty field to a boat show. Water and electricity laid on then marqees being put up, and boats arriving by road and being craned in. Some boats going straight on to site as land based displays.
Next port of call will be Mkt. Harborough and a trip home for a few days to see family and my latest G`child who arrived a week ago, baby girl Kiera weighed in at just over 9lbs.
Well it is just about to rain again and as i am on the front deck blogging to get a good signal i must now stop as my laptop is not waterproof. 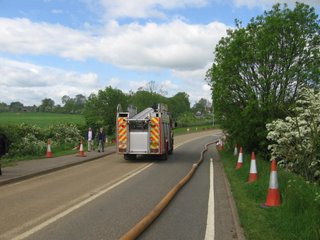 Part of the 2 miles of hose from crick bridge to fire site. 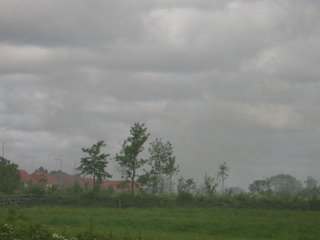 The smokey sky 12 hrs after the fire started. 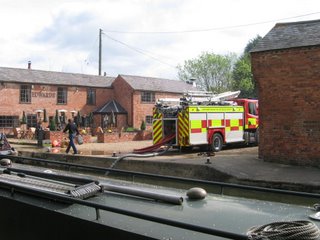 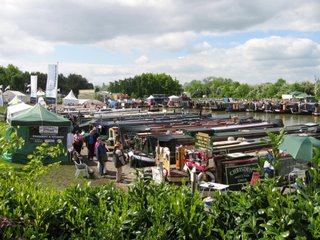 A view of the marina and some of the many new boats on display. 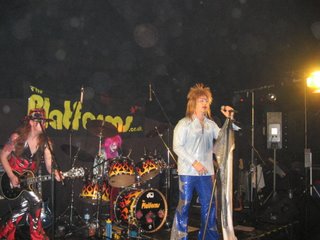 Sunday night the entertainment provided by a rock band "The Platforms"
Posted by Les Biggs at Monday, May 29, 2006

Hi Les, havent left a comment before on your blog but do read it now and again. My daughter and I were at crick. Other half should have been there too but was delayed and couldnt make it. We really enjoyed the entertainment with 'The Platforms' but have to say they were even better when they were playing in the early part of the evening. Had a great weekend (all be it a very wet saturday) and will certainly go again next year. cheers Mary