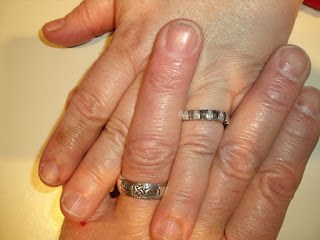 This morning I slowly put the boat back together. As I was looking through the wardrobe I found a large framed picture of Les that friends had given me at Les' memorial service. I decided to hang it on the wall at the end of our bed. After a cup of chamomile tea for breakfast I checked in with family on FaceBook and posted a remembrance to Valerie, whose birthday was yesterday. I grew cold this evening and I decided to get a bag of coal down off the roof. I haven't done that since March. I always wear the same gloves and Les' grey zip front sweatshirt cardigan when dealing with coal bags as they are dirty. I dug into the very back of the coat cupboard by the front door for Les' cardigan and removed it from its hook...and inside one of the pockets I had already checked, were his keys.
All this time I have been waiting for a sign from Les; a sound, a song, a symbol, a dream, but I got nothing. The lack of a sign from Les has tested my personal belief system deeply. I have known since I was a small child that there is more on either side of our lives on earth because I have memories from before I was born and my own mother confirmed this for me much to her own shock. I am the weird one in the family who hears the voices of the deceased at the moment they pass, or I meet them in my dreams and then learn when I wake that they have died. I have had my own close meetings with death in this life so for there to be silence from Les' soul has been yet another trial to endure as I relentlessly questioned everything I believe, my past experiences surrounding death, and the depth of Les' love for me.
I realize now that the profound intensity of my grief formed a wall between his soul and mine. Yes, I still grieve for him and I always will, but now I can remember him with joy. I can talk to him and say his name and not feel like someone is cutting out my heart without anesthetic. Now, our relationship is similar to that which we had before Les died. I know without doubt that this is what we have both been waiting for.
Posted by Mrs. Jaqueline Biggs at Tuesday, August 28, 2018

Oh Jaq .. please dear dear friend ...give your self a brake. Find some way to forgive yourself. You did all you could, all anyone could, and more. Les would so Not want you to be grieving in this way. It will be a great month/day when the 24th comes and goes and your look back and say, "oh, I didn't notice." That will be a Yea!
And as for the job situation .... I find that so appalling that no employer out there realizes what a gem they would have in you. I, all who follow you, feel your pain too. Please hug and forgive yourself.
Finally some blue sky and sun in Pullman. Karen

A beautiful piece. You are stronger than you think, and you are not alone. X

A very short sighted employer that was Jaq, to give you hope and then shatter it, and I'm very sorry for you that happened. Karen from Pulman says all that I would say too ... give yourself a break and forgive yourself ... you have nothing, nothing at all to feel guilty about. Your love for Les was all encompassing and true as was his for you and he really, really would not want you to feel as you were. Now that you've had this moment of insight I hope that you can go forward with a clear conscience, a lighter heart and a strong mind. With all our love ... Carol and George. xx

Keep going Jaq! re the swimming; it's not the same I know as I haven't got a lung condition, but the last time I swam (a couple of months ago) I hadn't swum for over a year and was, like you, gasping for breath. I was worried as I am accustomed to running several miles at a time and I don't get out of breath doing that but someone told me until I regained my 'swimming fitness' I would struggle. Also, I know you can get swimming supports which are comfortable and way better than the old scratchy arm-bands that kiddies used to wear when learning - could you get the benefit of the movement in the water if you didn't have to keep yourself afloat as well? The pool should have someone able to advise.
By the way, I have experience of keys turning up where you KNOW they couldn't be during a period of intense grief for a loved one.
love, Debby x

Lovely to read your latest blog post,I've been thinking about you a lot lately and wondering how you were doing. Sorry to hear about your flair up hope it's settling down again. So pleased you now feel at peace about Les. You did all you could for him and have nothing to berate yourself about. Take care of yourself, do give the swimming another go but nothing too strenuous, build the duration up by degrees.
Love and hugs Judith nb Serena

Oh hurray blue skies and sun in Pullman and no smoke!! I hope Eastern Washington experiences a lovely Indian summer with clear skies and sunny days.

Thanks Pal for your continued love and support. I am a perfectionist--just one bead off of being OCD. I don't hold others to my standards--just myself. And being a woman makes it worse. You know how we women are: we refuse to give up and throw in the towel on anything until we are convinced we'e tried every avenue, moved every stone, and given it our all. I think had I not been dealing with knee surgeries in 2016 I would have had a clearer mind and perhaps have been able to give Les more time with less pain. But it is what it is..no do overs are there? I've reestablished out relationship link and I have peace in my heart now.

Please when you have the time and strength, keep me posted on things with you. If you can arrange Reiki treatments I highly recommend them. They made a difference in my healing outcome with cancer.

I love you to the moon and back again,

Hi Anonymous. Is that you Teresa Tunnicliffe????

Many thanks for your continued love and encouragement. Everyone keeps saying the right job will come along. It had better come along in time for me to pay my annual license fee and take care of some large boat repairs, which means soon! In the meantime I remind myself I am not homeless, I am not starving, I am not cold, and I ma not unloved so today life is good.

Okay I will swimming another go. I am a very driven person and it seem pointless to waddle around in a pool when I could be doing laps. The outdoor brine pool is really lovely. It is such a shock to be faced with corporeal evidence on declining health. While I have not always had good health I I have always pulled myself through with grit and determination. At 60 I am now learning that even with determination it is sometimes no longer enough.

I've had several emails from others who have had similar experiences with returned keys after prayers to dead loved ones so I am thinking this phenomena is fairly common as extra sensory experiences go. It doesn't surprise me as keys are a very personal thing--especially for men who often carry their keys on them all day long. Like jewelry worn all the time, the keys become imbued with the molecules and energy of the one to whom they belong.

I hope we catch up with each other bow to bow some time as I would love you hear your "key" story.

It warms my heart to know your look out for my blog posts. I will give swimming another go. Dealing with Crohns is exhausting. It is really difficult to go out anywhere without taking my own food and drink to ensure I don't end up eating something I can no longer digest. It complicates thing immensely. Fortunately I only consumed one cracker and the pain lasted for a short duration--eight hours and then was gone. The cessation of pain is such a blessed relief. Even labor pains didn't hurt like that.

I look forward to seeing you and John again sooner than later. Take care,