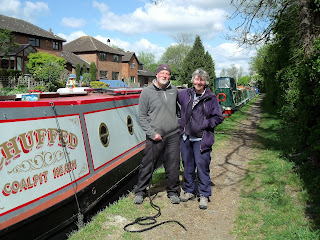 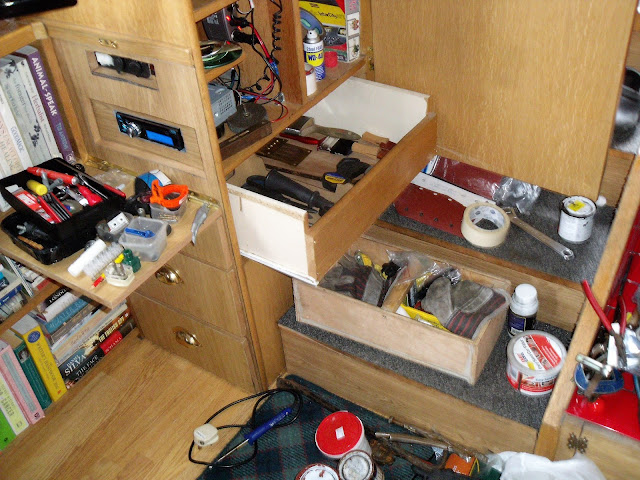 Battery operated, one taps the bottom of The Egg on a hard surface to turn it on and taps it again to turn it off.  If left on it will shut itself off after about a minute and a half. The Egg produces bright light and I can carry it in the palm of my hand late at night to use the loo or make a cup of middle of the night tea. Brilliant!!
Posted by Mrs. Jaqueline Biggs at Sunday, April 30, 2017

Tools. toys and trinkets. It is what we men do. Ladies have their teapots and things...

Momma,
Love the nightlight & after you get all the man drawers tidied you'll have such storage! Love you 1000 Swedish Fish!

Gosh Jaq what a baptism of fire you've had to contend with on your first sortie out on your own, and what a pitiful job Cowroast Marina did on the engine. Do you think you've got the energy to contact them and give them a piece of your mind?

I'm sorry but I had to smile at the picture of you with your head over the sink and wearing the window too! Still it was better it happened whilst you were in than if you were out for an extended time leaving a gaping hole in the boat for any passing intruder.

I hope that tomorrow sorts out all your engine problems and that you have managed to take advantage of the fine weather during your enforced stay and that tea and cake with Doug and James has lifted your spirits with a good old laugh!

You're always in our thoughts, love from us both. xx

Oh Jaq ... oh my god....this is a trial by fire and wire and bureaucracy and I don't know what else. You aren't even given a chance to grieve and wail ... maybe for now that's for the good. But no doubt about it .. you are one warrior lady and you Will not only survive but thrive. The book(s) you will write will be hard to put down. We are cheering for you lady.
Karen in Pullman

So glad you got the water problem sorted, Jaq. "If you don't ask, you don't get..." as someone said to me the other day.
All fingers and toes on nb Cleddau are crossed that RCR manage to get you sorted and on the move again very soon.
Love as always,
Sue/ Boatwif/ nb Cleddau

Hi Jaq, for all your trials and tribulations with your comments and observations you still managed to make me laugh. Hope all goes well tomorrow and you will soon be on the move again. Judith nb Serena.

Sounds to me as if you need your stern gland re-packing....not a big job. Good Luck,

LOL! Yes Bryce it is what it is and you have succinctly defined it. Holding you close in my thoughts this week as you go for pre-op and other medical stuff.

Who taught you to be so positive in the face of what sometimes feels like overwhelming odds? Even if I don't h ave more room, I will at least know what I do have and where to find it! I love my Egg light! It is my new night time companion....and I love you more than 100 millions Swedish Fish!

It certainly hasn't been dull, I'll give you that! I'm glad I made you laugh! I guarantee if Les had been here he would have laughed, and I did too. It is just so absurd isn't it?!!

I am still waiting for RCR. Bank holiday weekend and all that...It wasn't Doug and James it was Adam and Adrian on NB Briar Rose who hailed me in both directions.

As for Cowroast Engineering, I will never, ever rust him again and he will never, ever touch my boat again. I did try talking with him about things, but he made up excuse after excuse, as though I were too dumb to understand things and it was all my fault we had a "misunderstanding." Les has had a lot of work done on our boat by him over the years. When Les was alive he always treated us both with kindness and respect. It is only now that I am a woman, singular, that his treatment is different. It is what it is, and what it is, is bitterly disappointing.

Biggs big hugs to you and George,

You have aptly described it to a T! I am being taught quite a few life lessons all at once. Today I am focusing on living in the present moment. I so appreciate your and Jim's kindness, encouragement and support. It is so great to have strong, feisty friends in one's cheering section!

Love and Biggs big hugs to your both,

Thanks for the multiple crossed digits! No word yet...I am being taught a lot of life lessons all at once here. Lets just hope I can remember them all!

You are correct about don't ask don't get; still it is hard for me to ask for help. I never want to put anyone out, but the lady at the lock cottage was so nice. And I am learning just how far I can stretch five gallons! :)

Looking forward to seeing you and Ken soon,

Well I am glad I made you laugh! It made me laugh, sanding there at the bathroom sink with a porthole frame around my neck and toothpaste dribbling down my chin!

I certainly hope this doesn't stretch out to take the rest of this week but it well could do.

I am crossing my fingers in hope that stern gland greasing is really all it is, along with replacing the bilge pump hose. I don't know how to do that, but I will learn. After all I have some overdue caddywompling to get on with!