A Few changes on board NB Valerie


During the past 6 months I have managed to do a few small jobs on the boat. These are jobs that should have been simple and straight forward but with my body fighting the invasion of our Mr. C. every job has turned into an ordeal.

Back in the summer the oncologist gave me 6-12 months and I have almost passed the 6 month date and still feel reasonably good. Now I will face that 12 month deadline around about July 2017. Make no mistake the cancer is gnawing away around my lower back and if it wasn`t for the pain killers life would be un- bearable.

When Jaq went into hospital recently to have her second knee replaced our grandson Jack came and stayed for 3 days mainly to ensure I took medication and most importantly didn't have a fall. Balance has been a problem with the extra amount of liquid Morphine I am consuming.

Taking advantage of Jack`s stay, we decided to fit a new sink that Jaq had been wanting for some time. Without doubt the strength of young Jack was needed to lift the sink in and out several times as the frame had to be changed from a round profile to an oblong. I kid you not I haven`t enough strength now to keep lifting the sink in and out. 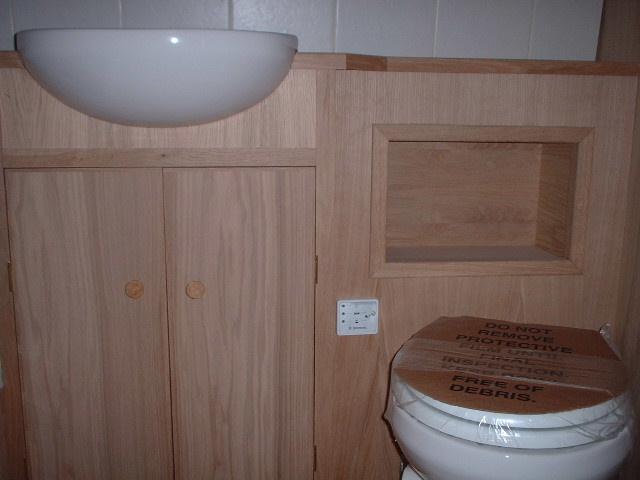 This picture dates back to 2006 when the boat was being fitted out and shows the round sink sitting in an un-laquered wood veneered unit. On the right is the vacu-flush toilet--that to be fair gave no trouble for 6 years. Owing to the weight of the cassettes and Jaq being unable to stand the smell of emptying them we decided to go down the composting loo road and install an Airhead which we did in 2012. 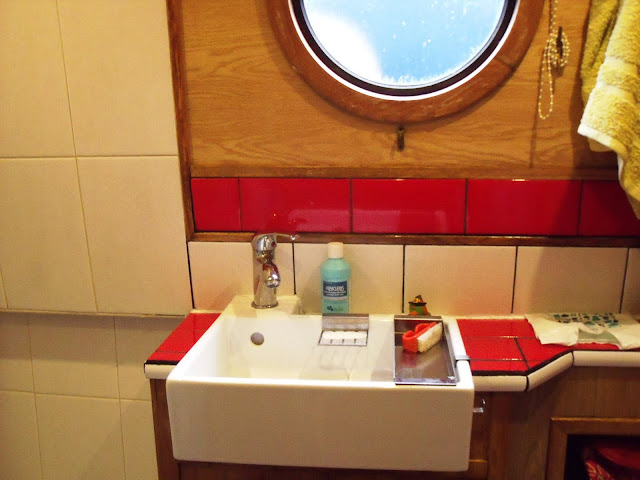 Now the round sink had to come out and grandson Jack was a big help in the lifting department. Tiling the tops was my job and installing the pipework, a lot of plastic push - fit, was pretty much straight forward for Jack who had no problem bending and stretching with my instructions in his ears. Well done Jack. 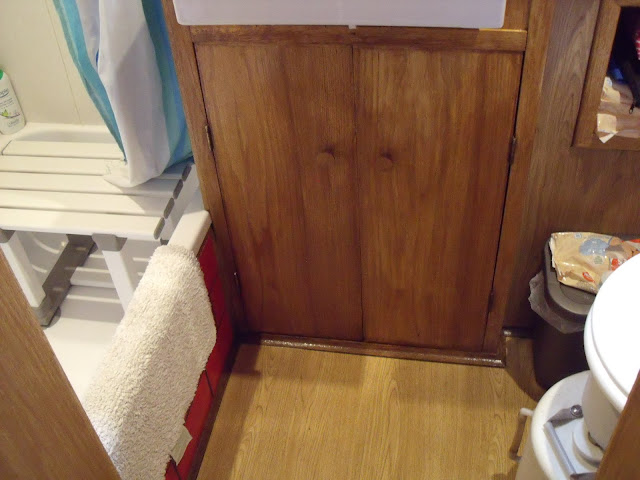 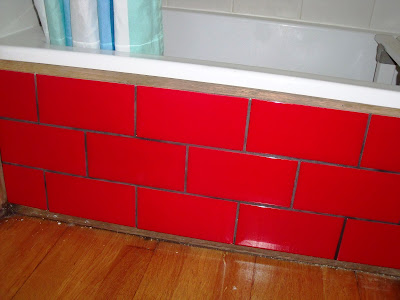 makes the floor much warmer.
The seat in the bath was supplied by the hospice nurses as my legs do tend to give way and being able to just sit as I shower saves me some damage if I should fall.
Other changes are to my diet and my view of my "five a day" seems to be "five per meal". 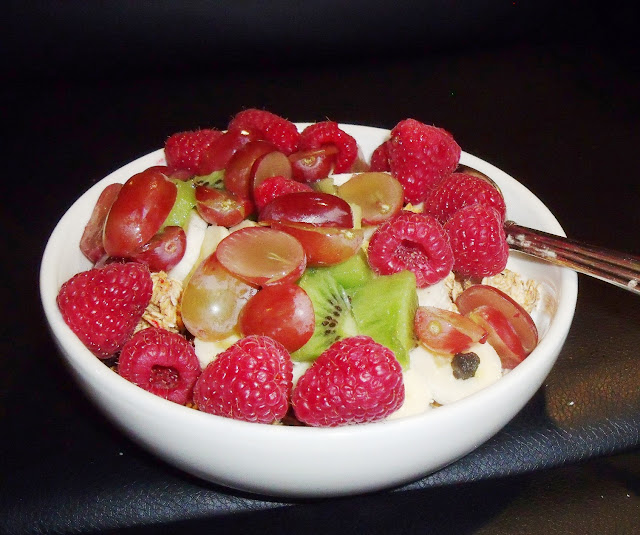 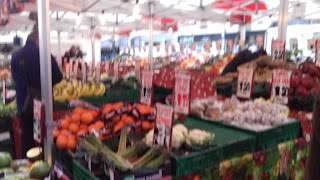 The picture above shows breakfast that has my "five" on top of a bed of Granola.  I have Banana, Grapes,Raspberries, Kiwi and Pear. This amount of fruit can be found as part of my evening meal and for sure the Berkhamsted fruit stall for one classes me as a good customer with my calling in twice a week. 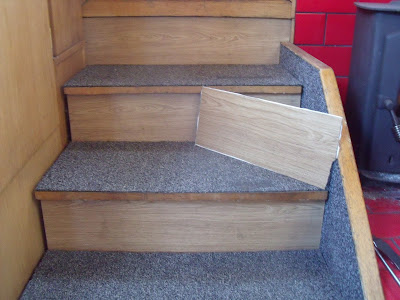 Here is another little job: using adhesive vinyl planks to make the kick plates on the stairs easier to clean. The thin veneer had begun to wear and the vinyl now just needs a quick wipe over with a damp cloth to remove scrapes left by shoes. 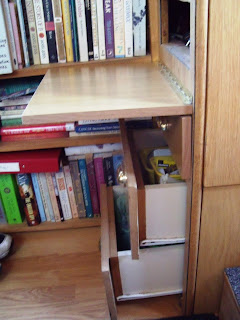 The drawer fronts to the left of the stairs I felt needed some attention. I used a panel meant for a BQ (home depot) kitchen cupboard and cut a drop down flap and three drawer fronts that now have the  grain running consistently from top to bottom. I have fitted the new drawer fronts as you can see, to the old ones and I think with the brass drawer pulls it all looks a lot neater.

The finished job all closed up. 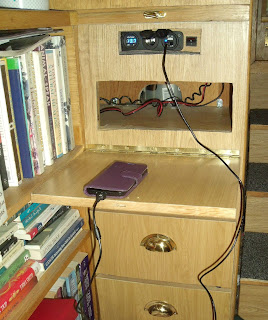 The drop down flap conceals two access points to the rear space that will be home to a small inverter to run the T.V. and any other electrical needs.  The smallest at the top houses a charging station(pictured below) that will charge phones, tablets etc that can be laid upon the pull down flap.

These are just a few jobs that have taken a long time to complete because of my current state of health: seven medications keep me fairly pain free and able to get about--for now.

Wow Les! That looks fantastic. You really are amazing. And it is lovely to read an update from you again. X
Sally

I love you both to the moon and back!! Thank you for taking such good care of eachother!

Wow Les you do Beautiful work. Really beautiful. I'm sure Jaq is thrilled and it's fantastic that despite all you are going through you want to and are able to do what seem like a lot of good work.

And how did Jaq's surgery go. Recovery and pain on schedule?

So good to hear from you. When it's silent we all out here worry big time.

Great to hear from you again Les, keep it up and love and hugs to you both from us. xx

Well done, Les. Know just how much it will have taken out of you but the satisfaction will no doubt compensate! Big hug to you both

Good work, Les and Jack. I am sure Jaq will be most impressed.

Looks good Les, you are becoming experienced at being a foreman!! xx

the bathroom etc look wonderful - as does the diet; 'keep on keeping' on (as someone once said, Alan Bennett I think, or was it Clive James?)