As you work through the Stockton flight of eight locks that allow for a change in level of 55 feet in less than half a mile it`s hard to imagine the industrial past that existed on the offside.The flight is marked on the map below as 4-11. Up until the 1930`s they were all single locks. The double locks were installed alongside and the old singles take excess water into the next pound.
These quarries relied on the canal to bring coal for the Lime burning and taking away limestone and cement. 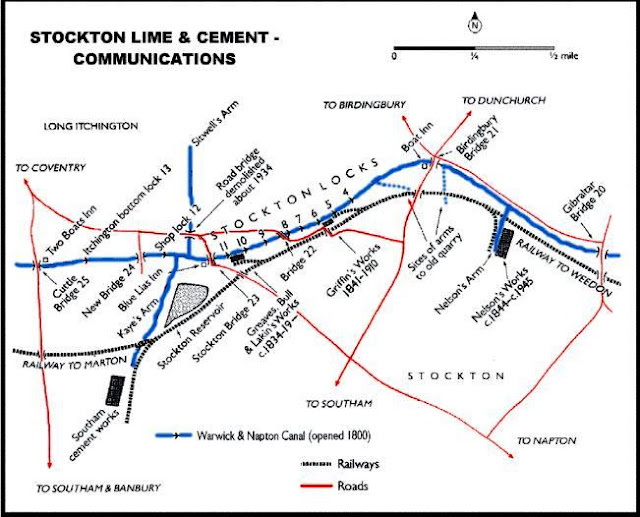 Looking at the map above you can see how the railway took a lot of the canal trade by putting sidings into all the works along it`s route.
Boaters might have noticed on the map Sitwell`s Arm almost opposite the Kaye`s Arm, traces of it can still be found. Also the two Blue dotted arms past lock 4. The first one is now Kate Boats marina and the second one past the bridge has not been that kind in leaving clues but I will have another look. Google earth shows the filled in quarry so you can get an idea of the canal arm`s position. I would like to find evidence of the railway crossing the arm. 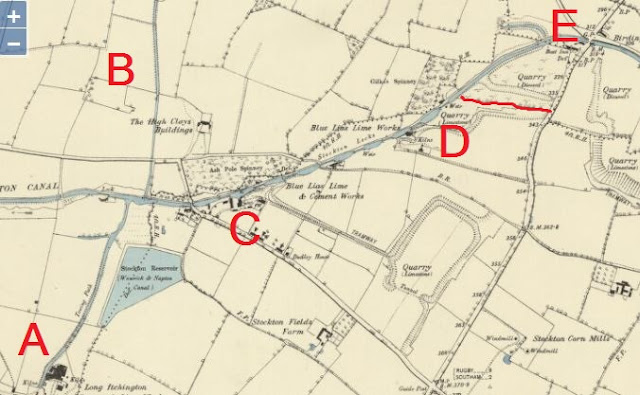 The above map of the same area is 1885/86. This LINK will take you to the maps where you can zoom and view the whole area for a better view.
A  Kaye`s arm.  B  Sitwell`s arm.  C  Greaves Bull and Lakins works.  D Griffin`s works
E is bridge 21 the Rugby Southam road, Boat Inn pub, Kate Boats and to the right of the bridge the site of the old quarry arm I want to investigate more.

The section above the Red line enclosed by the road and canal was owned in 1792 by the church. Part of it was sold to the Warwick and Napton canal company for £52 and the rest to a Mr. Tomes and Mr. Hanley for £885.
Thomes a solicitor was chairman of the canal company and Hanley the chief engineer. They also in 1819 were responsible for digging the Kaye`s arm that serviced the Southam works. At one time the intention was to take the canal into Southam village but it never happened.

By 1841 the land belonged to a Captain Lamb and he leased it to William Griffin on a lease of £100 per year based on 4,000 tons of Limestone being excavated per year. On the death of the captain the land was bought by the Nelson family who owned Nelson`s works further along the canal. 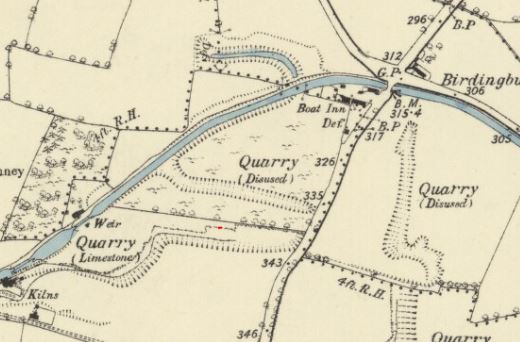 This is a zoomed in section of E and D above. To the lower left are the Lime kilns at Griffin`s works. The higher quarry near the Boat Inn that became Kate Boats is the section sold by the church. The quarry to the right of the boat inn is where one of the old quarry arms entered that are marked in Blue dots on the map at top of page.

Below two zoomed in views of C. This is the Greaves, Bull and Lakin works alongside locks 10/11. Notice the very wide pound(section of canal between locks) where the buildings are next to the canal. You can see the Kilns(circles next to canal) alongside what must have been a wharf. Also there appears to be a tramway running past the kilns alongside the canal to a building.

The first map is dated 1886 and the second 1904. (click dates for link to each map)
Notice how the railway has now appeared and the works has trebled in size with extra Tramways and the railway entering the works. The works became an Aluminium smelting works and today is used by Dowdswell who make ploughs.


I urge you, if interested in a bit of history, to read the article in the link as it goes into more detail of what I have mentioned in my post. Link HERE.

Les ... is there a book in this? Interesting stuff ... even across the pond. Karen in Pullman