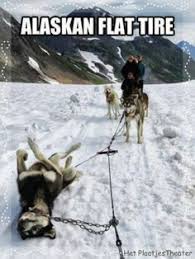 As we tarry awhile here in Warwick while I continue to heal, a dear friend in Burlington, Ontario sent me a link to a news clipping titled "Fairbanks to the Rescue: Railroad to Haul Snow to Barren Anchorage for Iditarod"  about Alaska--or to be specific--about the total lack of snow in south central Alaska where Anchorage lies. There is so little snow that it is being hauled down from Fairbanks, up in the interior as the region is known, by train cars and loaded into dump trucks to fill Anchorage city streets with enough snow to facilitate the start of "the last great race," as the Iditarod sled dog race is known and which begins March 5th. The ceremonial race start is in downtown Anchorage on 4th Avenue and is the only part of the race other than the finish line 1049 miles farther north, where there are throngs of spectators watching and cheering. Of course I knew about the dearth of snow from my sister Susan who lives in Anchorage. She shockingly confided to me last month that her neighbor was out mowing his lawn!!! But of course, there is no such thing as global warming...
Anyway, if you love dogs, if you have great respect for working dogs, and you find challenges against the forces of nature too fascinating to pass up, then please do familiarize yourself with this race. The Iditarod Race commemorates The most famous event in the history of Alaskan mushing: the 1925 Nome Serum run. A diphtheria epidemic threatened the Native village of Nome, above the Arctic circle; especially the Alaska Native children who had no immunity to the "white man's disease". The nearest quantity of antitoxin was found to be in Anchorage--537 miles south as the crow flies. Although there were planes available at the time, both were out of commission with mechanical issues.
With the Governor's approval an alternative delivery was planned. A 20-pound (9.1 kg) cylinder of serum was sent by train 298 miles (480 km) from the southern port of Seward to Nenana, where it was passed just before midnight on January 27 to the first of twenty mushers and more than 100 dogs who relayed the package 674 miles (1,085 km) from Nenana to Nome. The dogs ran in relays, with no dog running over 100 miles (160 km). If the serum had been transported by sleds all the way from Seward, it would have been a journey of just over 938 miles.
The first commemorative race was held in 1967 and offered a purse of $25,000.00. In recent past years the purse was $600,000.00 with $50,000.00 awarded to first place and the remainder divided between the top 30 finishers, with every musher finishing below 30th place receiving £1049.00. This has changed in 2016 with the first place purse is $70,000.00, with an equal amount doled out to the first five through the finish line in Nome. The first prize winner also receives a new Dodge Pickup truck.
Other prizes are given out along the way: a Rookie of the Year award is given to the musher who places best amongst those for whom it is their first time ever racing in the event. The Red Lantern award signifying perseverance is given to the last musher across the finish line; $3000.00 in gold nuggets is awarded to the first musher to reach the half way point of the race, along with a gourmet seven course meal. The nuggets are awarded back in Anchorage at the race awards banquet but the seven course gourmet meal is provided by a chef flown into the village of Cripple on the Southern Rout or Iditarod on the Northern route depending on which route is being run.  After days of eating energy bars and trail grub I imagine it tastes divine!
There are two routes mapped out for this race and they are alternated with the the northern route run on even numbered years and the southern route on odd numbered years. 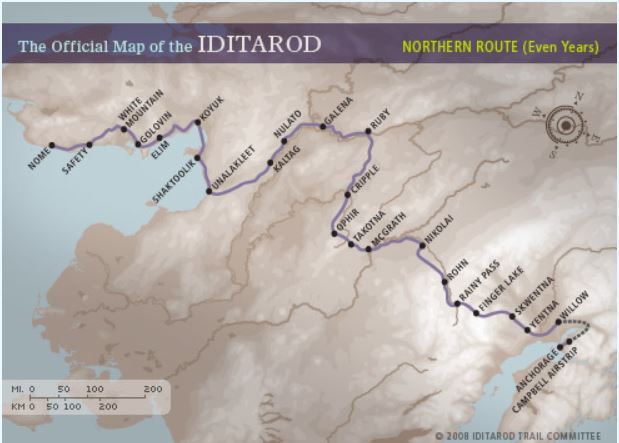 The Iditarod also has an educational component: Teacher on the Trail. Every year applicants are sorted through and winnowed down until one individual is selected to be the Iditarod Teacher on the Trail. This year it is Lauren Wright form Austin, Texas who will be flown from checkpoint to checkpoint to report on the race for teachers and classrooms of school children all over the planet who will follow the race. Lauren will also provide lessons for classroom use. Teachers can send in an application to the Iditarod Education Department. From those applications, three teachers are selected as finalists. The finalists fly to Alaska, participate in the teacher workshop, have an interview, write lesson plans, and attend the banquet, the start and the restart. After the race is over, one of these teachers is selected to be the next years Teacher on the Trail™.
Post Script:

For our American friends and family:
According to Wikipedia, the phrase in my post title, Carrying coals to Newcastle refers to the fact that historically, the economy of Newcastle upon Tyne in north-eastern England was heavily dependent on the distribution and sale of coal—by the time of the first known recording of the phrase in 1538, 15,000 tons of coal were being exported annually from the area—and therefore any attempt to sell coal to Newcastle would be doomed to failure because of the economic principle of supply and demand.

For our British friends and family:
When communicating with sled dogs the word "mush" does not mean run--it means chow time! Here is the brief lexicon of mushing and what each means:
Hike: get moving
Gee (hard G): turn right
Haw: turn left
Easy: slow down
Whoa: stop
On by: pass a team coming in the other direction