Grindley Brook, Whitchurch and a Pointer

We approached the lock flight and decided to have some lunch before tackling the Grindley Flight of 6 locks 3 of which form a staircase flight. After lunch we joined a queue of just 2 boats for the first 3 locks and upon reaching the staircase that as always is under the control of a lock keeper we were told﻿﻿ 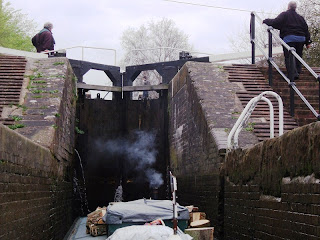 we were the 4th and last up the flight as he had a queue of boats waiting to come down. So a lucky break during what was the Easter school holiday break. Upon reaching the top we stopped at the service block for water etc and counted 18 boats waiting to go down. A couple talked of being there 3 hours. So for us an easy journey. The lockeeper let 8 down before once again letting boats up.
Walkers in Whitchurch was originally built as a house in the 15C and has alterations made in the 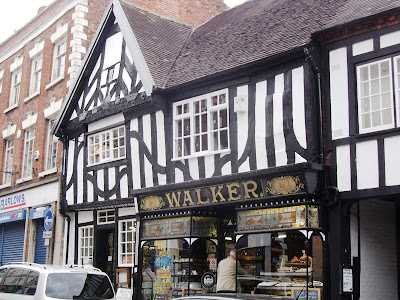 16C and 17C. This timber framed building is the second oldest in the high street and the most complete medieval building. Never having been inside I took Jaq in and we had coffee on the upper floor. The stout wooden beams i felt could tell a few stories of the past 500 years.

I have been with T-Mobile for a few years and my present contract had run it`s course. My plan had been Web `n` Walk £15($22.5) per month and allowed 3GB. I decided it would be nice to have a wireless router for the Internet and went into the T-Mobile shop to check it out. The so it seemed helpful young lady said I could have the Pointer for £7.50 ($11). All terms and conditions the same so i`m thinking this is a bargain.
﻿ Anyway after a short time the screen told me i had exceeded the T-Mobile  fair use policy. Now although T-Mobile will not cut your connection and still allow general surfing and e mail your heavy download ability is blocked. For me this was a first, we don`t download much in  the way of video etc and 3GB has been fine for years. So on the phone I discover that the Web n Walk is no longer sold and that the new plans come with 1GB!!!!!!!!! Click HERE and hold your cursor on the i after always browse and e mail where the plan details box is and it will reveal the 1GB info. SLY is just one word I would use.
I managed to change my plan to 10GB at a cost of £12($18).  So at least I now have the wireless unit and a reduction in price. Just be warned if you have the web n walk deal. Just a mention for our U.S. readers the wireless device is free when you have a monthly plan as  is a cellphone plus a new phone each time you re-new your contract. Jaq is not sure how it works in the states but does say she paid $55 per month for hi speed broadband so any U.S. comments would be of interest to us here in the UK.

'Free' phones, routers, etc in conjunction with Mobile Service is an interesting concept.
Whatever service deal you have, compare the cost of a SIM only contract with the cost of getting the same service (Data, texts, landline calls) with a 'free phone included.
I'm sure it's only a few pounds extra per month. Now multiply that extra by 24 or 36. The answer is the cost of your 'free' phone.
IMV when the vendor uses the word free they are being as SLY as the shop assistant / company you dealt with, BUT it's a concept they seem to have successfully sold to the majority, and the world is full of unwanted phones waiting to be recycled, instead of just used.

Regards, and thanks for an interesting blog. I enjoy the 'explanations to our US readers', showing us how we look to others. :-)

hi David
The cost of per day access to the internet is huge compared to a monthly contract. Also the same goes for a phone. A monthly contract is cheaper and the phone comes with the contract but of course the cost is built in to the contract but it is still cheaper than the high cost of non contract calls.
I have a phone contract £10/$15 that gives me
400mins of calls
300 texts
un-limited landline calls.