It`s been quite pleasant here in Braunston waiting for post to arrive but the time has now come to break out and head for pastures new.
A meal out with Sue,Vic,Chas & Anne was lovely as was chatting to other non-blogging friends. The arrival of George & Carol on Rock `n` Roll resulted in a lovely evening aboard their boat for drinks, thank you it was a lovely evening.

Over the w`end the BCBM boat share show took place and Braunston marina was a hive of activity with 2 days of good weather attracting a steady flow of people. Marques were erected and several commercial outlets were 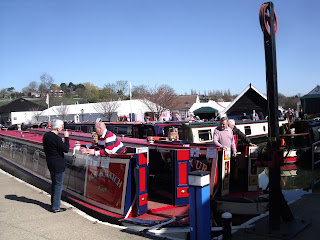 present including Barrus Engines, Kinver Furniture, Top Box, and i spotted  Waterway Routes with a fine collection of DVDs. Also the Cheese Boat was attracting a crowd.
What interested me most, i have no need of a boat share, was the stand for the restoration of NB Lucy.  A lot of boaters will remember her sunk along the Puddle Banks here in Braunston and might wonder what became of her. Nb Lucy has been raised and now resides on dry land just next door to Midland Chandlers. 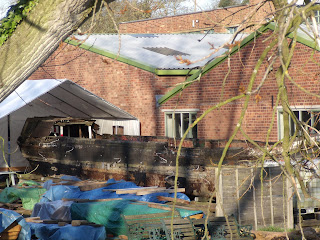 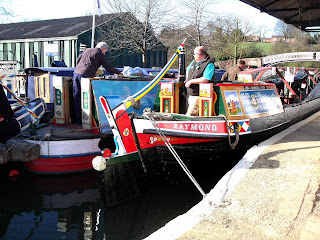 launched here in Braunston in 1958. The only wooden boat built since on the canals is i believe `Maid of Oak` built for Julie and Peter Thorn the hull being launched in Jan 2004 at the yard of Bates Boats on the Grand Union Aylesbury Arm. I had the honour of being shown around the boat by Julie back in 2006.
﻿
Posted by Les Biggs at Monday, March 21, 2011