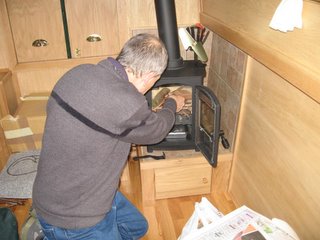 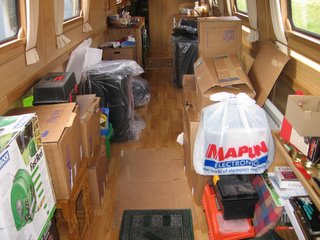 From chaos to firelighting in one 24 hour period!! We came over on Friday evening after Sue finished work to spend our first weekend on board. Les had been very busy during the week assembling the chairs and chest of drawers, finding homes for some of the box-loads, and trebling the kitchen cupboard space by using Ikea wardrobe basketry! More to follow on this in the next blog!!
We'd cooked a casserole on Thursday so believed we only had to heat it and cook some veg to get a quick and nourishing meal on Friday night. WRONG!! The gas cooker kept going out unless the door was open - not much re-heating going on then. Vegs were nearly ready and Sue cursing the b****y oven. Plates warming in the grill (that kept warm when the jets were alight) and cold meat in the cass. READ THE HANDBOOK - oh! the jets need about 1/2 hour running to bed in. Finally it all came together and a lovely but late meal was taken.
An early night was planned, then 2 sets of instant messenger friends were spotted and we ended up chatting on line till late. Hope to meet up with them soon.
Up early for a major tidy up before the first of the weekend visitors arrived. The shower is very good, quick brekkie then Les lit the stove. Phil had said it would smoke a bit, but this was not too bad. The eco fan was soon spinning warmth all along the interior, Les fitted loo roll holder, towel rail and had just finished the shower shelf when Rachel + Chris arrived (Sue's neighbours) bearing champagne and 2 YES TWO cakes!! We had a smashing few hours chatting, snacking and demolishing the champers and culminated in starting the engine for the first time and Sue doing a roof walk to prove she'll be able to 'do the garden'!! The kingfisher which flew across in front of us all and landed on an adjacent boat was surely the icing on our 3rd cake!!
So very tired again now, but warm and content. Another busy days of family and friends tomorrow to look forward to!!
Posted by Les Biggs at Saturday, February 18, 2006